September 2012 marks the 70th anniversary of the so-called Wielka Szpera (Allgemeine Gehspere, General Curfew) - an action carried out by the Germans in the Łódź ghetto. As a result, over 15 thousand people were deported from the ghetto, including almost all children under 10 years of age. This concluded the first phase (lasting from January until September) of deportation of Jews to the extermination center at Chełmno on the Ner (Kulmhof).

Below, we are presenting  video footage of the performance, made by Grupa Filmowa as well as photographs by Kamila Bogulewska

Video reacording and photographic documentation were possible with the financial support from the Museum of Polish History in Warsaw, under the “Patriotism of Tomorrow” program. 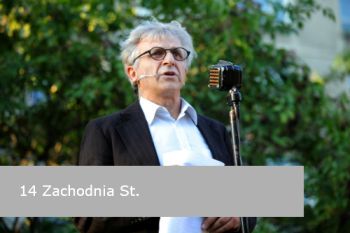 14 Zachodnia St.
It is one of the least known and at the same time most important places in the Łódź ghetto. At 13 Lutomierska St., the office of the Jewish fire brigade were located. At the back of the building, there were the fire brigade barracks with cars and equipment. It was there that Chaim Mordechai Rumkowski, the Eldest of the Jews in the Łódź ghetto, gave his speeches. The buildings at 13 Lutomierska St. no longer exist, replaced by blocks of flats. Only one of the houses survived (at 14 Zachodnia St.). It was in front of that building that Rumkowski gave his famous speech in September 1942, appealing to the residents of the ghetto to give away their children so that others may be saved. 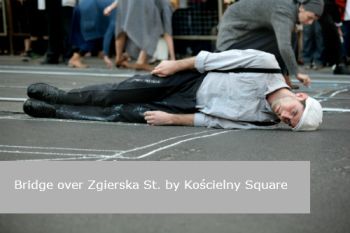 Bridge over Zgierska St. by Kościelny Square
Two streets, Zgierska and Limanowskiego, were excluded from the ghetto and belonged to the Aryan part of Litzmannstadt. The ghetto, intersected by these two streets, was divided into three parts. At first, at specific times, special gates were opened through which the residents could move from one section to the other. In the summer of 1940, three wooden bridges were erected, connecting the divided parts of the ghetto, allowing people to cross over the streets. 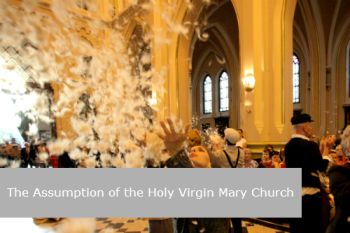 The Assumption of the Holy Virgin Mary Church
During World War Two, the church of the Assumption of the Holy Virgin Mary was located within the Łódź ghetto. For thousands of Jews who had to move to the ghetto, the church and the nerby wooden bridge over Zgierska Street were the most important symbols of the ghetto. In 1942, the Nazis decided to transform the church into a warehouse for storing stolen Jewish property. From spring to autumn 1942, clothes of people murdered in Chełmno on the Ner were brought there. Some people discovered the clothing of their loved ones who had been deported in an unknown direction. The Jews called this place “white factory” and the Virgin Mary - the patron of the temple - Mary of the Down. 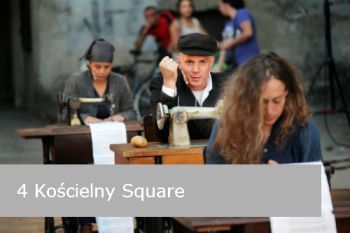 4 Kościelny Square
In the corner building at Zgierska St. “The Chronicle of the Lodz Ghetto” was created, one of the most important documents of World War Two. Chroniclers collected documents concerning the operation of the ghetto: announcements, posters and circulars as well as Rumkowski’s speeches and deportees’ documentation– their passports and personal letters. Also here, at the Department of Statistics worked the ghetto photographers and graphic artists who created propaganda materials, showing that the ghetto was useful. Many of these documents survived to this day and are now found in the State Archive in Łódź. 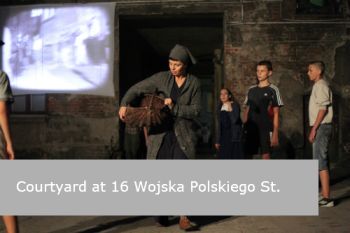 Courtyard at 16 Wojska Polskiego St.
In the years 1940-1944, almost 200 thousand people lived in old buildings in the Łódź districts of Bałuty and Old Town. Jewish families lived in each building. Children, their parents, grandparents, uncles, neighbors. Adults work hard, food was scarce, diseases spread, but children - as children do- were playing how they could. Until to September 1942. 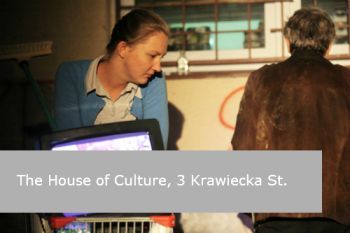 The House of Culture, 3 Krawiecka St.
This small building, where today a local shop is located, used to be a cinema. The auditorium held 400 seats and a stage, where both symphony orchestra and theater troupes could perform. This was the center of the ghetto cultural life. The house of culture opened on March 1, 1941, although theater performances and concerts had already been held there. The troupe consisted of prominent pre-war Jewish artists, including Moshe Puławer and Róża Bloch, the orchestra was by conducted by Dawid Bajgelman, decorations were prepared by Pinchas Schwarz. After transports from Prague, Berlin and Vienna arrived at Litzmannstadt, world-famous virtuosos performed there, as well as children from orphanages. After “wielka szpera”, cultural life in the ghetto practically ceased to exist. In the summer of 1943, the building was converted into a department of quilts and blankets. 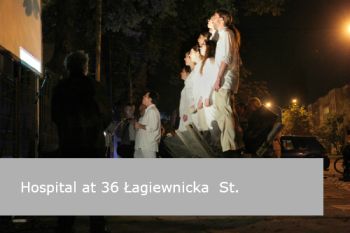 Hospital at 36 Łagiewnicka St.
The building was constructed for the Health Fund just before the war. It was one of the most modern and elegant buildings in the Bałuty district. During the war, it housed the Department of Health created by Rumkowski and Hospital No. 1. In one of the wings, there was the private apartment of the Eldest of the Jews in the ghetto. Until September 1942, health care in the ghetto functioned more or less normally. Tthe most common documents issued were death certificates. It was only during the September “szpera” that all hospitals were closed down. The Germans deported all the sick to Chełmno on the Ner. The rallying point for people selected for the deportation from the ghetto was located here.

Video recording and photographic documentation were possible with the financial support from the Museum of Polish History in Warsaw, under the “Patriotism of Tomorrow” program.

From January until May 1942, 55 thousand Jews from the Łódź ghetto and nearly five thousand Gypsies from Austria were sent to their death, but it was that autumn action of Wielka Szpera that became the most important moment in the history of the ghetto, the most tragic and most often remembered, probably because the victims were small children. Deportations took children from orphanages, shelters and hospitals, babies were torn away from their mothers and families. There is probably not a single person who went through the Lodz ghetto that would not be personally affected by these events. The memories of Szpera appear in all testimonies, diaries and interviews. The history of the Litzmannstadt ghetto is divided into before and after Szpera ...

The word “Szpera” derives from the German expression Allgemeine Gehsperre , which meant a general curfew - a strict ban on leaving the house. It was introduced on 5 September 1942 and lasted until 12 September. It was preceded by the famous speech of Chaim Mordechai Rumkowski delivered on 4 September 1942, at the so-called Strażacki Square, beginning with the words “Give me your children ...”. Children were deported and the Germans turned the ghetto into a labor camp. From then on, everyone who managed to survive Szpera had to work hard.

From February until December 2012, in secondary schools in Łódź and in several towns in the region, the Dialogue Center is carrying out an educational project “Give me your children ...”, including lessons, exhibition, screening of the film “From the depths I cry ..." directed by Wojciech Gierłowski, reading passages from diaries written by children, talks with students, etc.

The year will conclude with a series of events in early September, including a performance of "Szpera ‘42” directed by Tomasz Rodowicz (Łódź) and Ruth Osterman (Israel, Tel Aviv), realized in co-production with the Chorea Theater, which will feature Polish and Israeli artists, as well as other events.

Polish Parliament proclaimed 2012 the Year of Janusz Korczak, a doctor from the Warsaw ghetto, who did not abandon his pupils and followed them to death. Also in the Łódź ghetto, teachers and carers never left children from orphanages and followed them on transports during Szpera. Łódź had its own Korczaks, therefore the main theme of this year's events will be the deportation of children in September 1942.

Join us at the events commemorating this tragic moment.
Program of the events below:

HOSTS OF THE EVENT: The Mayor of the City of Łódź and the Head of the Jewish Community in Łódź