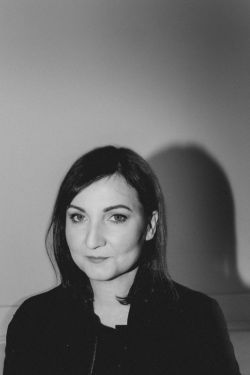 Cultural manager, specialist in cultural policy, involved in independent artistic projects. Coordinator of the Łódź – European Capital of Culture 2016 project on behalf of the Council of the City of Łódź and coordinator of promotional campaigns carried out by the following stations: BBC World News and CNN International. Historian of culture by education, graduate of postgraduate curatorial studies at the Jagiellonian University. Between 2012 and 2019, she was responsible for the development and implementation of the Integrated Development Strategy for Łódź 2020+, as well as programmes supporting artistic creation: artistic scholarships and artistic residencies in Łódź. From February 2020, financial and organisational specialist at the Marek Edelman Dialogue Center in Łódź. Privately, mother of five-year-old Różyczka.

In 2004, I was a member of the team preparing the ceremonies for the 60th anniversary of the Litzmnstadt Ghetto liquidation. It was an extraordinary experience, it was the first time that people spoke on such a large scale about the tragic events that took place in August 1944 in Łódź. At that time, I also had the opportunity to contribute to the making of a documentary for TVP “Ocaleni z Litzmannstadt Getto” (eng. “The Survivors of the Litzmannstadt Ghetto”).The Marek Edelman Dialogue Center is a modern, unique institution that deals with the history, memory and identity of the city. Working at the Center gives me a sense of belonging to a team that is passionate and dedicated to delivering culturally important and original projects.