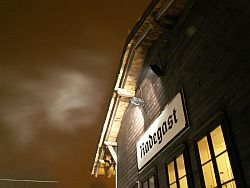 200 000 Polish, Austrian, German, Luxemburg and Czech Jews from the Litzmannstadt Getto were transported to extermination camps from the Radegast Station. Today the Station is the site of the Litzmannstadt Ghetto Monument.Situated in the north-eastern part of the ghetto, the Radegast Station initially served only as a loading station. The Germans using Jewish forced work, delivered food, fuel and raw material to the ghetto. The same station served for shipping manufactured goods which at that time were transported to Reich. Every year, 5 000 or 6 000 cars were loaded and unloaded there. From 1941, the Radegast Station was also used by Germans for people transportation. 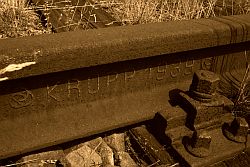 The Radegast Station building has remained till today. There is also an original railway track  with the name of  Krupp factory running next to the station. In the ’90  Monumentum Iudaicum Lodzense Foundation and the Jewish Community took on efforts to change the station into National Remembrance Place. Within one year  38 000 Jews and 5 000 Austrian Gypsies were transported to  Łódź through the Radegast Station. There didn’t stay in the city for long, as in 1942 the Germans deported to extermintaion camps about 150 000 people. Almost all of them ended up in gas chambers. The last transportation took place on 29th August 1944, and the train finished its jpurney in Auschwitz-Birkenau. It also meant the end of the Litzmannstadt Ghetto. There were a few people left to tidy the deserted district. Only 5 % out of 230 000 Jews living in Łódź before the war, survived. 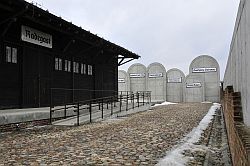 The discovery, that the wooden building with Krupp railway track was the Litzmannstadt Ghetto’s transportation station, was immediately followed by the idea of making it the monument commemorating  all those who passed through the ghetto. The monument was designed by Czesław Bielecki. The railway station, separated from the modern buildings with a brick wall which gives an impression of solitude and reflection of the tragedy that happened there. The place is designed to let visitors identify with those who were transported to the extermination camps. From the train depot, visitors walk through the 140 meter Tunnel of the Deported which symbolises inevitable fate of deported Jews. Its walls hold transport lists showing enormous numbers of those sent to death. 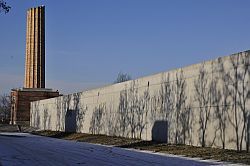 There is a Town of Halls  holding names of metropolies, cities and towns, from which Jews were deported to the Litzmannstadt Ghetto and the Column of Remembrance with a burning candle. The Memorial at Radegast leaves no shadow of a doubt of who was responsible for the Holocaust.There are two dates placed on the outer wall of the Tunnel pointing to the beginning  of Adolf Hitler government and the end of the II World War. The names of the railway station and extermination camps will be written in gothic style and in German.The completion of the building of Memorial Radegast took two years and it wouldn’t have been completed if it hadn’t been for Polish and foreign donors. About 40% of the total cost was donated by companies, private persons, institutions, government and foreign cities.