There were two Jewish cemeteries in Łódź. The first one was established in 1811 at Wesoła Street (not existing today) covering land of 612 square meters and was bordered by Limanowskiego, Bazarowa, Rybna and Zachodnia Streets - more. As there was no further possibility to extend the cemetery, it was closed in 1892. The same year a new cemetery in Marysin was opened. 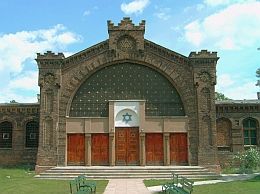 In 1889 it became clear that an old cemetery was too small and a new one has to be established. It wasn’t an easy task. The first location was suggested by Karol Dawidowicz Gay who wanted to sell his own ground.The ground was granted an governmental approval and was bought in 1890 but it was protested by local community supported by baron Juliusz Heinze as his land bordered on Gay’s ground. Heinzel wanted to solve this problem and proposed buying back Gay’s ground and suggested selling his other land at Marysin in return. He also donated money in order to build a road to a future cemetery The Jewish Community wasn’t very keen on the idea as the distance seemed too long. Search for the land continued, slowed only by the outbreak of cholera in 1891. That epidemic quickened the process of establishing a new cemetery.  In March 20, 1891 the decision was taken and Juliusz Heinzel’s land was bought with the support of Izrael Kalmanowicz Poznański. He wanted 512 square meters in the centre of the cemetery for his family vault in return. The official opening took place in November 10, 1892.

Organisation of the cemetery

Spring 1893, the cemetery was stock taken, tidied and fenced. Many trees were planted and the ground was divided into sections. The first graves were placed in northwestern part of the cemetery, named “the old field”. There was also “ a choleric field” for the epidemic victims. Markus Kon donated for the cemetery main gate, and in 1896 Mina Konsztat- a widow from Herman- a well known member of the community donated money to build a funeral house. Her wish was to place a foundational inscription in Polish. Unfortunately the authorities didn’t allow it. The inscriptions were only in Russian and Hebrew until 1918. According to the tradition, women and men were buried separately. All matzevas were  facing East. Family vaults along the main alley were the exceptions. 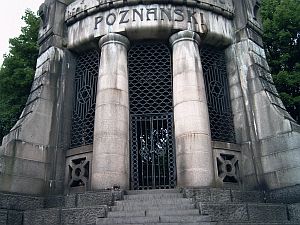 This cemetery became the burial place for  many members of the Jewish community: rabbies, manufacturers, teachers, doctors, scientists, politicians and social activists. There are many interesting and beautiful tombs; the most interesting are Mina and Herman Konsztat’s tomb with Toscan colonnade, the Hellenistic tomb of Markus Silberstein or the gigantic, monumental mausoleum of Izrael Kalmanowicz Poznański, made of grey granite. It may not be the most beautiful one but it certainly is the biggest. There is a mosaic by Venetian artist Antonio Salviati in the dome of the tomb. A tombstone of Ruta Akawie is rather unusual element as far as Jewish tradition and religion is concerned. According to them, depicting human figure is strictly forbidden. Łódź was under strong Orthodox and Hassidism influence for a long time. Eliasz Chaim Majzel was a Chief Rabbi from 1912 and Eliezer Lejb Treitsman (Hassid from Ger) was his deputy. In 1897 there were 98.676 Jews among 310.302 Łódź cititzens. 94,9 % of Jews spoke Yiddish and only 4,1 % spoke Polish. Despite the fact that Łódź was mainly textile centre, a literary-music association “Hazomir”was established in 1899. During the First Works War a symphonic orchestra came into being under the patronage of the association. 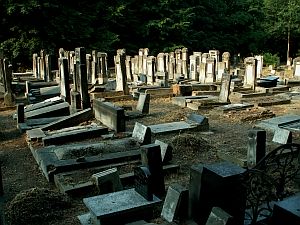 The cemetery was destroyed in a great extent during the First World War. It wasn’t until 1923 that the cemetery was renovated. It was fenced and a funeral house, synagogue, mikvah, maintenance buildings and orangery were built. At that time Hassid group lost its importance. After orthodox rabbi Treitsman’s death there was a split and two rabbis took over- conservative Samuel Rabinowicz and reformed Markus Braude. In 1921 Łódź Talmud Tora (religious school) was turned into a craft school and in 1924 Bejt Jaakow-a school for girls was opened. Cultural, artistic and political life was thriving . There were 11 synagogues, a Jewish hospital at Sterlinga street, a mykvah and 8 Jewish sport clubs in Łódź. From 1921 till 1939 the population increased  from 156 155 to 233 000.

The Second World War and the post-war period 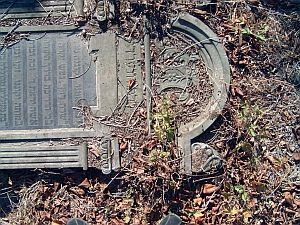 During the Second World War the cemetery was a quiet witness of a tragic fate of Łódź Jews. In February 1940, located at the eastern border of the ghetto, it served as a secret mass execution place. At so called “ ghetto field” there are 43,000 people buried. Among them there are Jews who died of exhaustion, hunger or were murdered in the ghetto, Roma people murdered in the Gypsy Camp and murdered in mass execution resistance members. Before leaving Łódź, the Germans ordered the execution wall to be demolished to hide the traces of crime as there were bullet wholes in it. Although the Germans destroyed all synagogues in the city, the cemetery remained. The cemetery buildings were pulled down by the Germans and its remains were demolished  after the war in 1945. After the war the cemetery was maintained by The Jewish Congregation. Until 1949, 50 000 Jews who had survived war in Soviet Union, settled in Łódź. At the time Zionist organizations established kibbutzes preparing people to move to Israel. Despite the fact, that in 1950 communist authorities closed the borders and kibutzes, over half of the Jewish population had managed to leave. In 1956-57 and 1968 another emigrations took place and only  few hundreds of Jews stayed in the city. In 1973 Chief Rabbi Wawa Morejno left. In 1956 murdered inhabitants of the Litzmannstadt Ghetto were cpmmemorated with tables. In 1980 the cemetery was enrolled into a monument register. A Public Committee for Protection of Jewish Cemetery in Łódź was set up. Thanks to private foundations the mortuary was renovated  and the graves at the “ ghetto field” were marked.

The biggest Jewish necropolis in Europe

During 100 years many prominent Jews including rabbis,  manufacturers, teachers, doctors, scientists, politicians and social activists were buried there. Their tombs are very often piece of art. There is also a resting place for victims of the annihilation of the Litzmannstadt Ghetto called “Ghetto’s Field”.
The cemetery is also maintained of by the Monumentum Iudaicum Lodzense Foundation. The Foundation keeps the cemetery in order on the regular basis, cleaning overgrown with plants graves and restoring its original character. It also supports restoration of the main gate, funeral house, matzevas and mausoleums of a great historic and artistic importance .The reconstruction program  includes securing the cupolas of the Silberstein family vault and reconstructing Jarociński family vault.  The broken wall of the cemetery was repaired thanks to donations from Foundation of Polish-German Cooperation and Eternal Remembrance Foundation.

The Foundation finances also the research works on the cemetery. Mr. Dariusz Dekiert, the scholarship holder of the Foundation, made a full inventory of the part of cemetery call "The Old Field". This research showed the existence of the graves before 1892, what means before the official date of establishing the cemetery. In 1998 the Foundation started the efforts to give the Jewish Cemetery in Lodź the status of the Monument of the Polish Culture.