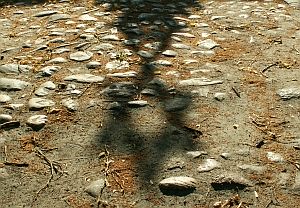 The first archive records about Łódź date back to 1322, but the first Jews weren’t mentioned until the second half of 18th century. According to the 1793 census, there were 11 Jews (two families) among 190 Łódź citizens. The growth of the Jewish population was recorded with the changes of borders in 1808 and 1815.In March 1809 there were 24 Jewish families (98 people) in the city. Lewek Salomonowicz, called also Jehuda Arie was appointed the first rabbi. There were not any synagogues or cemetery at that time. In 1809 a Jewish community  was established, with Pinkus Zajdler and Mojżesz Fajtłowicz as representatives.

The first wooden synagogue was built at Wolborska Street(former Dworska st). Many conflicts between the leaders brought about new community authorities’ elections in 1810. Pinkus Sonenberg and Mendel Moszkowicz were elected. The latter was soon to be replaced by Mojżesz Fajtłowicz who earned  the community’s credit again. In April 1811 the new management board bought the land from Adam and Magdalena Lipiński to establish a Jewish cemetery. In May 1811 The Sacred Brotherhood (Chewra Kadisza) came into being to protect the cemetery. The same year it expanded and became Sacred Brotherhood and Sick Nursing –Chewra Kadisza u-Bikur Cholim. These actions had a tremendous impact on the young community as it became independent from charges at cemeteries of Stryków, Zgierz and Lutomiersk communities.

The Łódź cemetery was bordered by Limanowskiego, Bazarowa, Rybna and Zachodnia streets and it covered 612 square meters. The beginnings were dramatic as superstitious people didn’t want to be the first to bury anyone at the new land which according to the legend, was an evil forces habitat. It was believed that it brought danger upon a soul. Finally a family of a poor tailor was convinced to burry him there. They agreed to that on the condition that a guard would stay at the grave the whole night saying prayers. Unfortunately the guard was deceitfully made drunk by the Lutomiersk community envoys who then stole the body and buried it at their cemetery. Fajtłowicz made sure that it didn’t happen again and guarded newly buried body himself till the next funeral. That was the beginning of the 80- year history of the cemetery.

Many restrictions were imposed upon Jews in following years.On January 1, 1822 Tsar Aleksander dissolved kahals and replaced them with Synagogue Supervisions subordinated to the Russian government. Next restriction came in 1827 limiting the settling of the Jews to area bordered by Wolborska, Poprzeczna streets and Stary Rynek. Tsar Aleksander dissolved also Sacred Brotherhood but it continued its activity building there a funeral house, janitar house and a solid fencing. 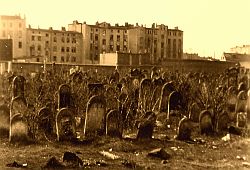 In the 80 years of its existence the Old Cemetery  witnessed  many ups and downs of Łódź and the Jewish community. The city underwent a crisis in 1831, 1844-45 and 1863. On the other hand, the city was developing tremendously, especially in years between 1870-1890. The main growth was noticeable in textile factories owned by Jews, Izrael Kalmanowicz Poznański, Markus Silberstein, Zygmunt Jarociński and many others. At the end of the 20th century Jews constituted one forth of the Łódź population. It lead to an overcrowding  of the Jewish district and cemetery (4800 adults and 8350 children were buried there). 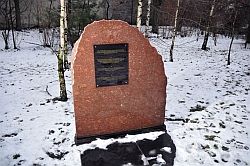 The Cemetery was closed in 1892 as it could not expand any further. It was almost completely damaged during the Second World War. June 26, 1942 the Litzmannstadt Ghetto German administration ordered removal of all gravestones. Matzevas were used for paving the streets. The cemetery was to be turned into a wood yard. In the ’50 of the 20th century, communist authorities  decided about building new streets and a housing estates on the grounds of the former cemetery. The only remaining  element of the Old Cemetery is a brick gate,which was removed to the new Jewish Cemetery at Bracka street (entrance from A. Cytryn str).

In September 2007, during the construction of the Łódź Regional Tram line, human remains were found at  Zachodnia and Limanowskiego crossroads. They were protected in accordance with the Jewish Community precise recommendations. The existence of the Old Cemetery is commemorated by a stone obelisk placed at 11 Rybna street.