The History of Litzmannstadt Ghetto

The beginning of German occupation

On September 8, 1939 the German army entered Łódź and straight away the German authorities began oppressing and terrorizing Jews. These actions were based on Nuremberg Laws from 1935 naming Jews to be outlawed without rights as citizens. From November 9, 1939 Łódź was governed by Artur Greiser whose idea was to germanize the area as soon as possible. He issued a number of ruthless regulations. 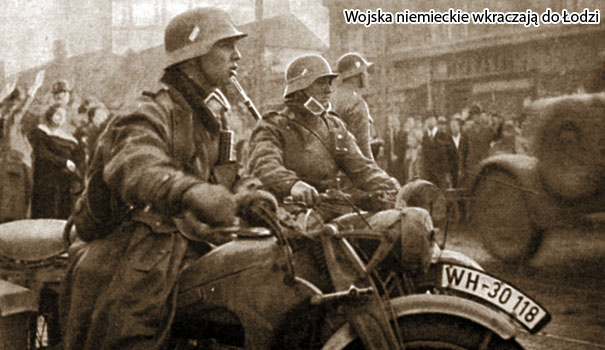 The first repressions date back to September and October 1939. They limited cash transactions and prohibited leather and textile trade. The idea behind these decisions was to isolate Jews and restrict mobility. The next document was issued September 1, 1939 and it ordered all the shops and factories to be signed with the owner’s nationality. Following that, came the order for Jews to wear yellow armbands. Violation of that was punished by a 6-week imprisonment or a penalty fee of 150 marks. Only children under 6 were excused. The armbands were replaced with yellow Star of David placed on the front and back of the coat.

The next restrictions forbade the Jews to walk along the main street (which changed from Piotrkowska to Adolf Hitler Strasse) to have any trade business and to walk in the parks or use the public transport. Violation of these restrictions was punished with unequal penalties. Within 4 days in November 1939 all synagogues were burnt down or blown up. 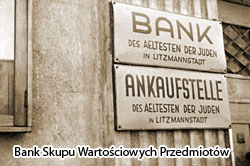 Not long after the invasion, the Germans started plundering Jewish shops and flats. Under the pretext of weapon searches they violently entered buildings and robbed all valuables. The Germans from Łódź, knowing their Jewish neighbors, participated in robberies or blackmailed them in order to gain financial profits or to take over shops and attractive apartments. On September 18, 1939 a new order was issued blocking Jewish bank accounts, deposits and safe-deposit boxes was issued. From that moment on the Jews could not withdraw more than 500 zlotys a week from their ordinary bank accounts and no more that 250 zlotys a week from their saving accounts. They could not keep at their homes more that 2000 zloty either. 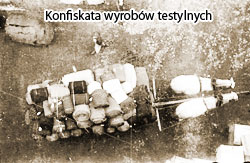 The Jews were forced to report and hand over all their textile materials and goods manufactured before September, 10. From the beginning of the war Jews were seized in street raids and sent into slave labor. The raids were conducted by the civil police and German inhabitants. Humiliation was the main driving force of these actions. In order to stop the raids, the Jewish Community formed a Job Office(Arbeitseinsatz I) that supplied German authorities with the workforce. At the beginning it provided 700 workers a day but the number soon increased to 2000 people. The workers didn’t receive any payment or any compensations for their work.

As it was mentioned before violence was present everywhere. Sicherheitsdienst (SD) operation groups, together with the police, captured Jewish political and social activists as well as intellectualists and placed them at Radogoszcz concentration camp. They got beaten and tortured and then were deported to Dachau and Mauthausen concentration camps or shot dead. On November 11, 1939 almost all members of Eldest Council were arrested and imprisoned at Radogoszcz camp. Only 6 out of 30 councillors were let free. The rest was tortured and then murdered in Łagiewnicki wood. 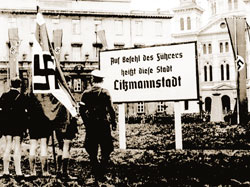 The document that enabled SS operational groups and central administrative offices to set up ghettos was issued by Reinhard Heydrich on September 21,1939. It comprised directions of Hitler’s policy towards Jews meant deportations, isolation and then, total annihilation of Jews. Annihilation act was hidden behind the word “Endziel”(ultimate aim) used in the document. On February 8,1940 Johan Schafer – a chief of Litzmannstadt police  placed a regulation in the “Lodzer Zeitung” newspaper ordering an isolated district for the Jews. 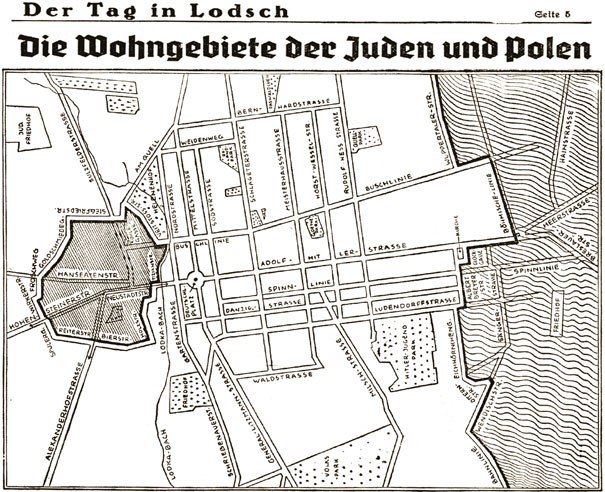 Zgierska and Limanowskiego Streets were excluded from the ghetto area as an important communication arteries for the Aryan parts of the city. Such exclusion entailed division of the ghetto into three parts. At the beginning the ghetto inhabitants could move from one part to the other through special gates that were opened only at fixed hours. Over time three wooden foot bridges were built. One over Zgierska near Podrzeczna St, the second over Lutomierska St and the third one over Limanowskiego St near Masarska St. 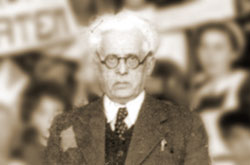 On October 13, 1939 Chaim Mordechaj Rumkowski was nominated as the Superior of the Jewish Eldest .  He was to follow German’s orders and become a liaison officer between Germans and Jews. Locating the ghetto in Bałuty – a district with no sewage system was a well-considered decision by the Germans. It made the possibility of escaping from the ghetto impossible. The fact that over 70.000 Łódź citizens were Germans also discouraged any attempts to hide outside the ghetto. These two factors made the Litzmannstadt Ghetto the most hermetic and guarded one set up by the Third Reich. It also made medicines and food contraband impossible. 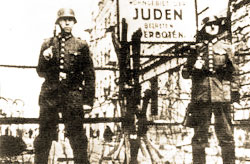 The Jewish people had only three months time to move into the ghetto and on April 30, 1940 the ghetto gates were shut for good. Once somebody entered the ghetto would not leave it. There were German soldiers stationed every 500 meters. They were under orders  to shoot to anyone approaching the ghetto’s fence from both Jewish and Aryan sides. There were notice boards around the ghetto stating: “Wohngebiet der Juden Betreten Verboten” (The Jewish District. No trespassing). 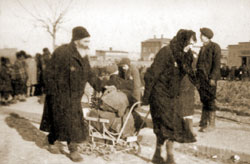 At the beginning of the ghetto’s existence, the Germans concentrated on plundering. They forced inmates to give up their valuables, clothes and money, using blackmail and starvation.The operation was coordinated by the Ghetto Board(Gettoverwaltung), Kripo (German criminal police) and the Gestapo.Slave labor was the main factor affecting the death rate. All people aged between 10-65 were forced to work in very hard conditions for 10-14 hours a day.

The employees received very low salaries for this intensive work. Soon after the closing of the ghetto food rations cards were issued. Unfortunately neither payment nor food rations were sufficient. 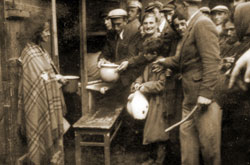 The chronicle includes information about food rations provided throughout the ghetto‘s sexistence. In 1940 the daily food ration consisted of 1800 calories. Two years later it was decreased to 600 calories per day. People were starving and did whatever they could to seize some food. It was a common practice not to report deaths in the families to get additional portions of food. Issuing vouchers to replace normal money made buying food from outside impossible. They had become the only currency recognized within the ghetto but worthless outside.

The Jews from the Western Europe

The process of deporting the Jews from the Western Europe to the Litzmannstadt Ghetto began in the Autumn of 1941. Within only one month, almost 20,000 Jews from Berlin, Prague, Vienna and Luxembourg were transported and were accommodated in the school buildings. With this, the schooling system in the ghetto came to an end. In the following months nearly 18,000 Jews from liquidated ghettos in surrounding towns (Pabianice, Brzeziny, Stryków, Włecławek, Sieradz and Wieluń) were placed in the Litzmannstadt Ghetto.

Subcamps within the Ghetto

The Germans created two camps within the ghetto. One for 5000 Gypsies from Austro-Hungarian borderland resettled in Novemeber 1941 and the other for children and youth in 1942.The Gypsy camp was bordered by Wojska Polskiego, Głowackiego, Starosikawskiej and Obrońców Westerplatte streets. This camp was 0.019 square kilometer and surrounded by two barbed wire fences.

The children and youth camp was located at Przemysłowa street and began functioning on December 1, 1942. There were many reasons for imprisonment in this camp.  Some of the children and youth came from the orphanages, some had their parents in the prisons or camps and the others were accused of  cooperation with resistance movement, stealing and illegal trade. The living conditions were as hard as those in the ghetto. Children and the youth were forced to work for 10-12 hours a day. Many of them died of exhaustion , starvation or diseases. The camp existed till the liberation of the city.

“Entrust Me Your Children…” 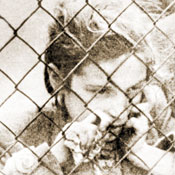 Another tragedy occurred between September 3 and 12, 1942. It was a deportation action against children under the age of 10 and adults over the age of 65. It was called “szpera” as the Germans had forbidden them to leave their flats. Chaim Rumkowski addressed the ghetto inhabitants with the following words:
The tragic fate has come upon the ghetto. They want us to provide the most precious things from us: our children and our eldests. I have never thought that I would have to make such sacrifice. In my old days I am forced to beg you: brothers and sisters  entrust them to us! Mothers and fathers –entrust us your children. Yesterday I received an order for the  deportation of  over 20 000 Jews… Entrust us with sick in order to save the healthy ones. I know how precious for you are those sick ones  but we have to consider  who should be saved and who could this salvation provide.

The speech wasn’t even finished when the crowds began to scatter. At the beginning the action was conducted by the Jewish police but soon transferred to German officers. During those few days the Jews  were not allowed to leave their homes. The ghetto was to be cleared of the “useless element” meaning children under 10, sick and unemployed. The Jewish police assisted by the German officers swept all houses with the transportation lists and 3000 people were to be deported each day. In the "szpera" action over 15,000 people were then captured and then gassed to death in special trucks. 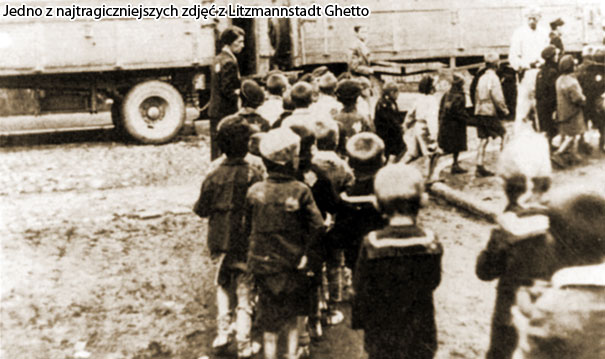 Few children that had been saved by their families had to stay hidden. In May 1944 the Germans decided to liquidate the Litzmannstadt Ghetto and new deportations started. 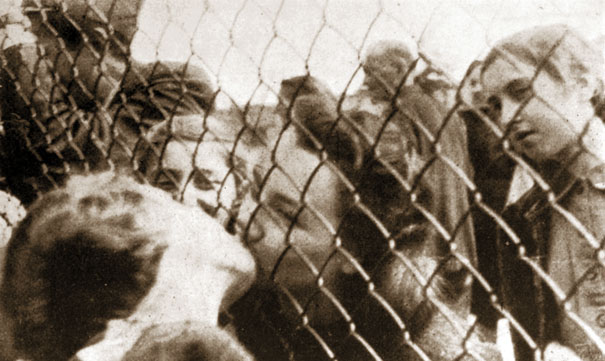 On June 23, 1944 the first transport of the Jews to Auschwitz-Birkenau took place. The transportees people were informed that they were going to the Third Reich. They were promised to go labor camps where they would stay with their families and would be provided with better living conditions. This pervasion  didn’t bring any result. The Jewish people would have rather starved than left the ghetto. Those who didn’t come to the assembly places were sought for and forced to transfer.
On August 28, 1944 Mordechaj Chaim Rumkowski together with his family was deported. 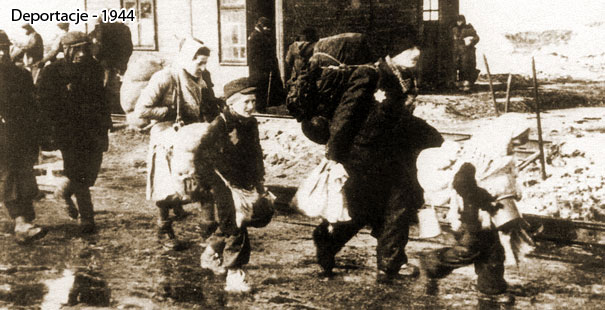 72,000 people were deported by August 29, 1944. The Germans left behind in the ghetto only 1500 Jews. A 830 people were responsible for clearing it and dignitaries were sent to labor camp in Konigswurstenhausen near Berlin and factories in Drezno. These were the ones to live to see the liberation in considerably good conditions. 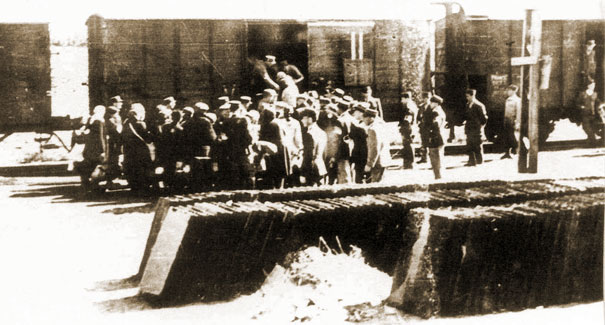