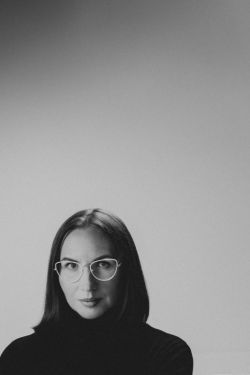 Graduate from Spanish Philology at the University of Silesia. Educator, licensed Łódź guide, author of the children’s blog Kolorek z Łodzi (eng. Kolorek from Łódź) and several guides to the city. Since 2011, she has worked for the Marek Edelman Dialogue Center, where she has organised numerous events as a press officer and promotion specialist, including the anniversaries of the Litzmannstadt Ghetto liquidation since 2011 (including the 70th and 75th anniversaries), the Jan Karski Year (2014), the Marek Edelman Year (2019). She was the spokesperson for the Łódź of Four Cultures Festival in 2011-2012 and the coordinator of the Kolorowa Tolerancja (eng. Colourful Tolerance) Festival in 2011-2021. Responsible for liaising with national and international media, she has also organised conferences, press offices, guest desk offices. Graduate of the Yad Vashem seminar “Nauczanie o Holocauście” (eng. “Teaching the Holocaust,” 2015) and of the seminar by Institute of National Remembrance “Zagłada Żydów” (eng. “Holocaust”) for teacher educators (2016). She completed the course “Effective promotion of cultural projects – cooperation of cultural institutions with the media: at the National Centre for Culture (2017) and is a graduate of the School of City Leaders (2018). Winner of the award of the Mayor of Łódź for culture popularisation (2019). She received a scholarship from the Ministry of Culture and National Heritage – “Kultura w sieci” (eng. “Culture on the Web”) as part of which she wrote fairy tales about Łódź. Owner of Just Lodz company.

The Dialogue Center for me is a very important place. What I value most are the people I have the pleasure of working with and meeting during the events I organise. I also know that our work has a purpose. Every event invites a moment of reflection. I believe that we fulfil the Centre’s mission with commitment and passion, and we care about changing the world at least for a little bit better.